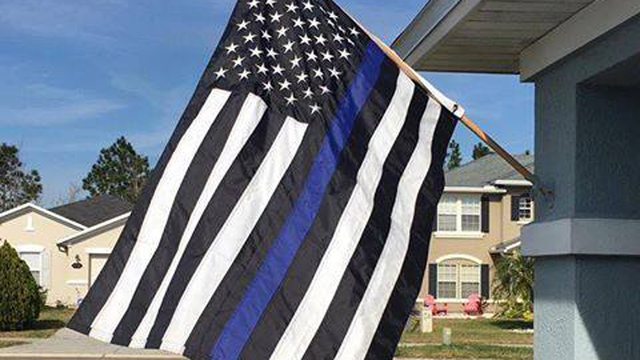 Jeff Gaddie says the “Blue Lives Matter” flag has flown outside his daughter’s home in St. Johns County for years. Gaddie told Fox 30 that his daughter flies the flag outside her home to honor him and other family members who are in law enforcement. “If you drive by and see that flag, it kind of makes you feel a little bit better that there’s a family that supports what I’m doing,” Gaddie said.

The First Coast Association Management homeowner’s association sent his daughter a letter, telling her the flag does not fit the rules and regulations of the HOA. The company said only American and military-themed flags are allowed to fly in the neighborhood. Portions of the neighborhood code say no flags will be displayed without approval.

“She called to ask why,” Gaddie told Fox 30. “They told her they had received a complaint that it was considered racist, offensive and anti-black lives matter.”

According to Gaddie, his daughter was told to submit a permission form for the flag, which was then denied.

This flag is causing controversy in one SJC neighborhood. Homeowner being asked to take it down, neighbor complained to HOA @ActionNewsJax pic.twitter.com/Q5rEWNKh5h