On Janurary 11, 2018, a video (11,000+ views) along with pictures were uploaded to Facebook by an account under the name ThatBoi Smokeyy of a Vero Beach Police Officer and an Indian County Sheriff Officer attempting to knock at a residents house in August 2017. In the 25-second clip you can see an officer look at the residents personal security camera twice before reaching up to it and powering it off.

In the caption of the video post the uploaded stated that:

If you think police harassment doesn’t exist in this county, you’re wrong . It doesn’t matter if you have 0 warrants, are at work minding your own business or even SLEEPING. These dickheads from BOTH IRCSO AND VBPD come day and night looking around my house , running my tag while my car is parked in my driveway. When I call and ask, They say they’ve “gotten reports of suspicious people at my house.” And when has it become ok for them to DISCONNECT MY SECURITY CAMERAS

After the article was originally written we were notified by our sources within the Sebastian Daily that even with the caption stating no warrants that their conversation with the Chief David Currey lead to the awareness that there was indeed a warrant and that the person was known to be armed. We were advised the camera was disabled for officer safety.

Normally we would reach out to both departments involved but since we have been involved with Indian River County Sheriffs public information office before and know that they willingly ignore Floridas State Statues 934.03 and 286.011 as seen in the video here we are asking if you are able to identify the officers in the videos please reach out to us so we can not only update this but also follow up with the departments. 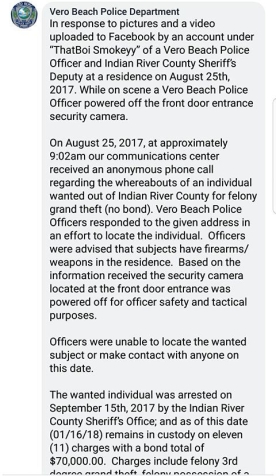 UPDATE: Vero Beach responded that the video uploader was not the one with a warrant but someone that was believed to be there.

UPDATE: ABC Action News has an exclusive interview with the victim which can be found here.

UPDATE: The innocent victim who had his camera’s removed is raising legal funds to take action against the officers and departments involved. If you would like to help click here.

EDIT 1/18/18 20:50 EST: Article was updated to include update from ABC Action News and update on victims plans on future.