On January 13, 2018, two videos surfaced online on Facebook of two ladies who were being detained with pants down in a Wal-Mart in Houston, Texas.

In the video you can see a crowd of both male and females surround and watch Houston Police Department handcuff the ladies as they role around on the ground with no pants on. 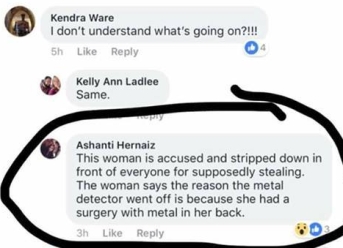 In the comments one person who commented stated that one of the ladies told officers that the reason the metal detector went off is because she had just had surgery that involved putting medal in her. There were also comments stating that the two were fighting.

Once more information comes forth we will update the article.