On May 9th, 2018, a small group of activists stumbled upon a Facebook group by the name of Scranton Police Department. Quickly they noticed that there was only one admin to the group and that the admin was not active since November of last year. Knowing that the admin was inactive, they knew they would not be kicked out of the group. They joined it out of curiosity and were quickly accepted. Once they successfully joined the group, they added a few of their friends to the group so they all could post memes, links, and statistics on law enforcement accountability while getting a reaction out of the nearly 15,000 members in the group.

Over the next forty-eight hours since the first meme was posted the number of members has fluctuated going as low as 13,200, but before members of the group left they decide to leave a few words. The pictures below are just comments on two posts.

After reading those comments the thought comes to mind, what in the world was posted to deserve those comments? The posts ranged from talking about Black Lives Matter, statistics on the deaths due to an officer, funny random meme’s, to copying what members wrote and reposting them. Those are just a few of the wide range of posts that were posted.

For some reason, the members list kept shrinking, even as the post started to turn more humorous than about police accountability.

As you see in the above post the first line of text says, “***ADMIN POST***”. Those that have been in a Facebook group typically know that is not how it looks when an admin posts. The image below shows how it would look and is the last post from the real admin.

Based off her post it seems not much has changed in how the members of the group react to those with different opinions. That did not stop the group from continuing posting acting as admin and with the response on each post one has to wonder how did they not realize that the group claiming to be admins were not admins. 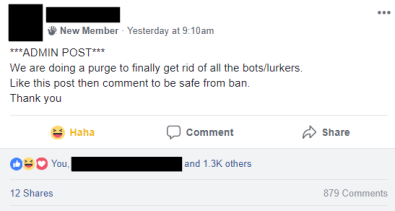 While leaving some members could not help but show their frustration about people having difference of opinion on police to the point they made a post before leaving as well as trying to create another group. 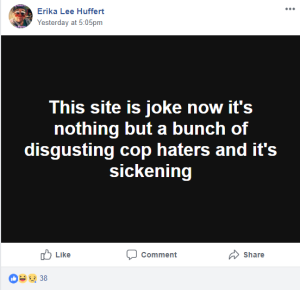 As the numbers bounced up and down on the members lists the posts continued to come. What we noticed is a lot of the members do not like Black Lives Matter as that is when they became the most hateful and ugly towards anyone that mentioned that name.

While in the group we were given a link on how diverse the department was in 2014. In 2014, there were 143-officer in the Scranton Police Department with only one being a racial minority. You can read about that here.

Below are a few of the other trending posts. If you would like to join the group and see first hand you can by clicking here or going to: https://www.facebook.com/groups/303566318567/