A disturbing video has surfaced on social media of a Baytown Police officer shooting his taser, which ended up killing a woman last night immediately after she screamed that she was pregnant.

According to police, a Baytown police officer was patrolling The Brixton apartment complex when he stopped Pamela Turner, 45, around 10:40 p.m., that he previously had interactions with and knew she had a current warrant for her arrest.

The 11-year veteran officer, Juan Manuel Delacruz, approaches Turner to arrest her as she was walking towards her house. In the video, Turner tells Delacruz that he is harassing her.

A scuffle unfolds and Delacruz gets on top of Turner in an attempt to control her arms to handcuff her. The woman screams, “I’m pregnant,” and Delacruz gets off of her. She proceeds to sit up and Delacruz steps out of view from the video and shoots his taser five times. Turner immediately falls backward. It is unknown how many of the five shots hit her. She was pronounced deceased at the scene.

Witnesses have said on social media that Turner was unarmed.

According to Photography Is Not A Crime:

“Turner’s sister, Antoinette, said Turner was on medication for schizophrenia. Antoinette also said that Turner had complained about the cop for harassing her on previous occasions. She said the cop lives in the complex but that has not been confirmed.”

Baytown Police Lieutenant Steve Dorris took to Facebook to release a statement, but the statement does not align with the video above. Dorris claims that the woman tasered the officer and that is when the officer opened fired. It is unknown if Dorris knew that there was a video of her death when he made the statement.

Baytown Detectives are on the scene of an Officer involved shooting in the 1600 block of Garth Road. It is very early in the investigation however what detectives have learned thus far is one of our officers, an 11 year veteran with the department, was patrolling an apartment complex in the 1600 block of Garth Road when he came across a 45 year old female that he knew from previous encounters and knew she had outstanding warrants. The officer contacted the female and attempted to arrest her at which time a struggle ensued, forcing the officer to deploy his department issued Taser at the female. It appears that as the officer was then attempting to handcuff the female she was able to gain control of his Taser and turned it on the officer, Tasing the officer, which forced the officer to draw his duty weapon and fire multiple rounds at the female, striking her at least once. The female has been pronounced deceased at the scene. The Harris County District Attorney’s Office is on scene and assisting in the investigation, as is normal in these types of incidents. Any future updates will be provided via an official press release later today, as the investigation unfolds.
Lt. Steve Dorris

Harris County District Attorney’s Office is currently investigating the death, which is normal procedure for police involved shootings. Delacruz has been placed on three days of paid administrative leave. 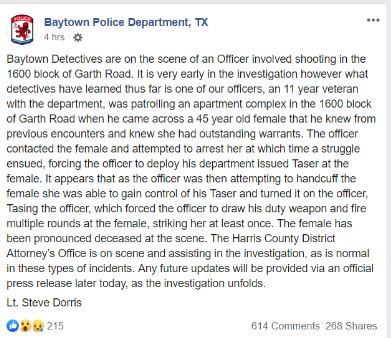